A Little About the History of Farming

A Little About the History of Farming
Posted by admin on August 12, 2018 in UK Commercial Farming 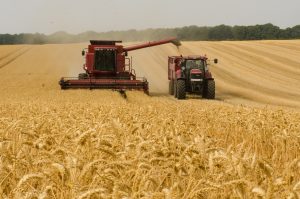 Farming has been intrinsic with humankind for millennia. Our ancestors went from hunters to farmers thousands of years ago, as can be ascertained by archeological findings in the Fertile Crescent, a region in what is now the Middle East. This was where it all started, when people now long gone took advantage of the flooded areas around the rivers Tigris and Euphrates to cultivate barley and wheat. Abandoning hunting life and taking up farming allowed once nomad tribes to settle in some sort of roughly limited territory. This and the domestication of wild animals for agricultural use paved the way for civilization as has come to be known.

The ancient Egyptians became one of the first civilizations to practice farming at a grand scale, seizing the chance presented by the periodical floods and ebbs of the Nile river. With time, they developed a system of canals in order to irrigate the farm lands, thus improving their harvests. First the Greeks stepped into their shoes, and then the Romans took over the Egyptian know-how, improved it and applied it to their territories.

Independently, organized farming existed in South East Asia, mainly in China and in parts of India, as attested by documents dating back to the VI century, but referring to centuries well before them. At this stage, agriculture could be found in some form or other in America, but not for a long time could it be called farming in the modern sense of the word.

Europe turned out to be the main stage for farming and the richness it brought. Starting from the Romans, Manorialism was set in place. It was a system by which a lord obtained a vast expanse of 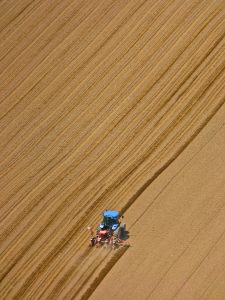 land from a king and would then have common people tending to his lands, for virtually nothing more than a shelter and just about enough to feed them. As a consequence, the lords who owned the biggest or more fertile estates grew in power and riches. This system, frequently enforced by the lord’s armed men, was going to last almost into modern times.

Farming saw many developments over time. The plough, at least 5,000 years old, was for farming what a shoe is for a horse. Irrigation systems followed, making the harvests less weather-dependable. Techniques such as crop-rotation were put in place over an extended period of time, before the use of fertilizers rendered them obsolete. Diversity was boosted by global exchanges of crops, made possible by international trade.

Farming has come a long way, as today it is mostly automated, and heavingly relying on laboratory studies, having never before been so productive. Terms like Genetically Modified Organisms or Organic Farms are also commonly enough heard of in this day and age.